These amazing Buffalo Chicken Phyllo Rolls that have a crispy shell and creamy center are so good, you’ll wish you had doubled the recipe! 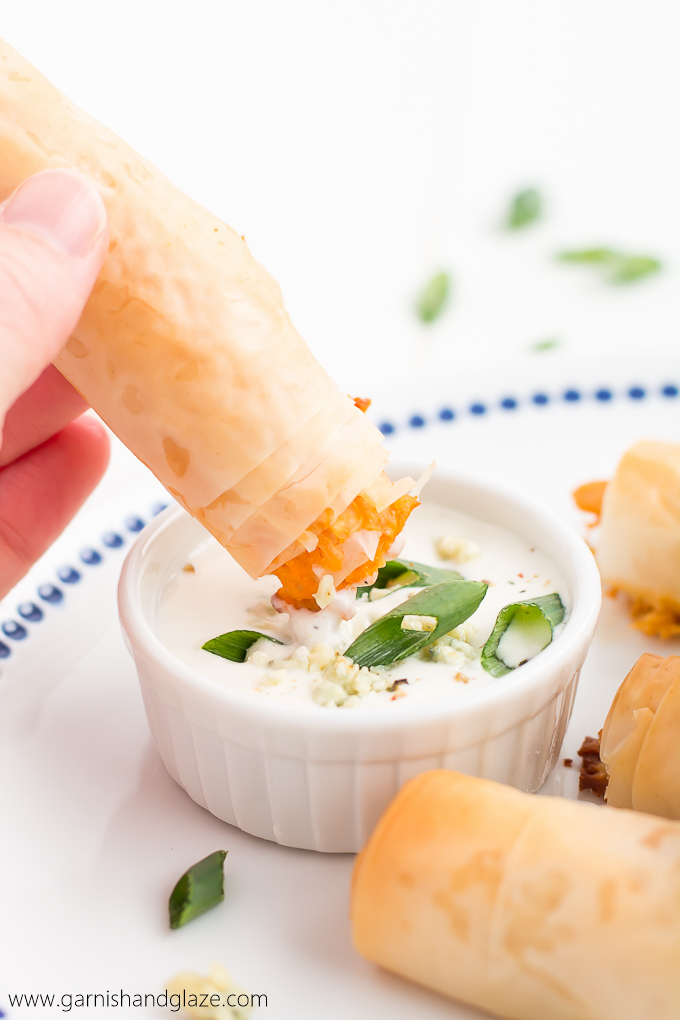 My 2 year old is obsessed with princess everything!  She wears her princess dress-up that’s really a nightgown everyday.  I was sick the last week and a half so I didn’t really push her to wear regular clothes since we weren’t leaving the house so now she’s in the habit of changing out of her footy pajamas and into her “punzel” dress when she wakes up.

I’m pretty sure she actually thinks she is a princess.  Sometimes when my husband and I tell her to do or not do something that she doesn’t want to she says defensively “I’m a princess!  I Carly!  Natalie’s sister!”  Uh, what?!  I’m not sure where she got it from that princesses are above the rules.  When she said this in response to me telling her to not throw a toy I told her even princesses aren’t allowed to throw toys.   Oh it’s so hard not to laugh sometimes.

Carly is such a little princess though!  She is the most gentle, loving, and happiest little girl (I might be a little biased).  Life is just so magical to her… until it’s time to get a diaper change or go to bed and that’s when the world ends.  This two year old definitely has her “terrible two” moments but it makes the sweet moments (which are thankfully much more than the terrible) all the more sweet.  But let’s move on to something spicy like Buffalo Chicken! 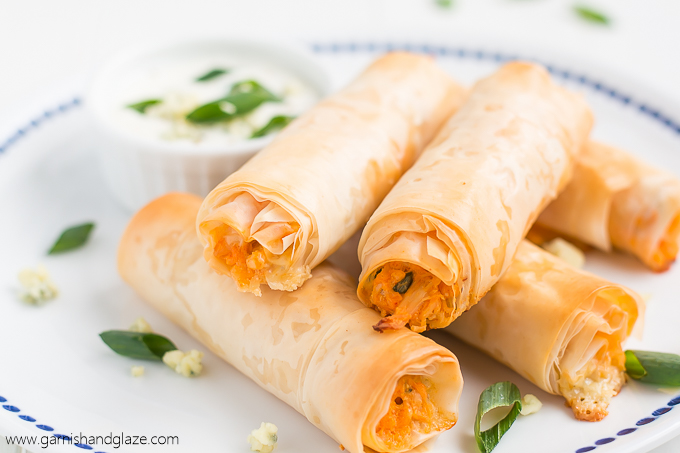 I LOVE appetizers!  Sometimes I even order an appetizer for my meal instead of an entree.  I just can’t resist potato skins, spinach artichoke dip, lettuce wraps, bloomin’ onion, the chicken finger platter… I could go on for days!!!

To that list I’m adding these Buffalo Chicken Phyllo Rolls.  Have you ever wrapped something up in phyllo dough?  It’s amazing!  You paint butter on each layer of dough (yeah, awesome!) and it makes this amazing crispy, flaky shell.  But that’s not all!  These rolls have a mixture of chicken, cream cheese, buffalo sauce, and bleu cheese in the middle.  When you bite into these crispy creamy rolls you are going to… want 5 more!  Just like my princess obsessed daughter.  I was actually a little surprised how much she liked these since they are a little spicy.  I was also disappointed because that meant there were less for me to eat!

Don’t wait another minute!  Get the Recipe!