Make Twice Baked Potatoes for a perfectly portioned delicious creamy and cheesy dinner side dish that can be made in advance! 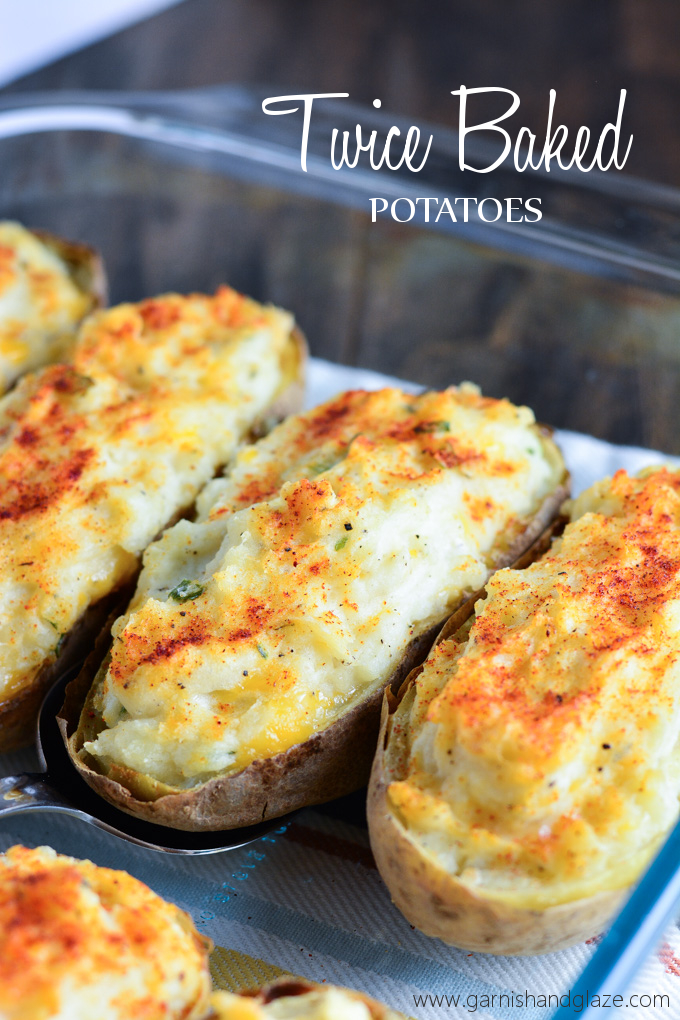 “And here we have Idaho!  Winning her way in fame…”  And that’s all of the Idaho state song I can remember of the many trips to my mom’s home state with her singing as we crossed over the border.  Do all states have a state song? Well, I’m in Idaho right now so it’s only fitting that I post a potato recipe, right?! I’ve been eating these Twice Baked Potatoes since I was little and they are still my favorite potato side dish! 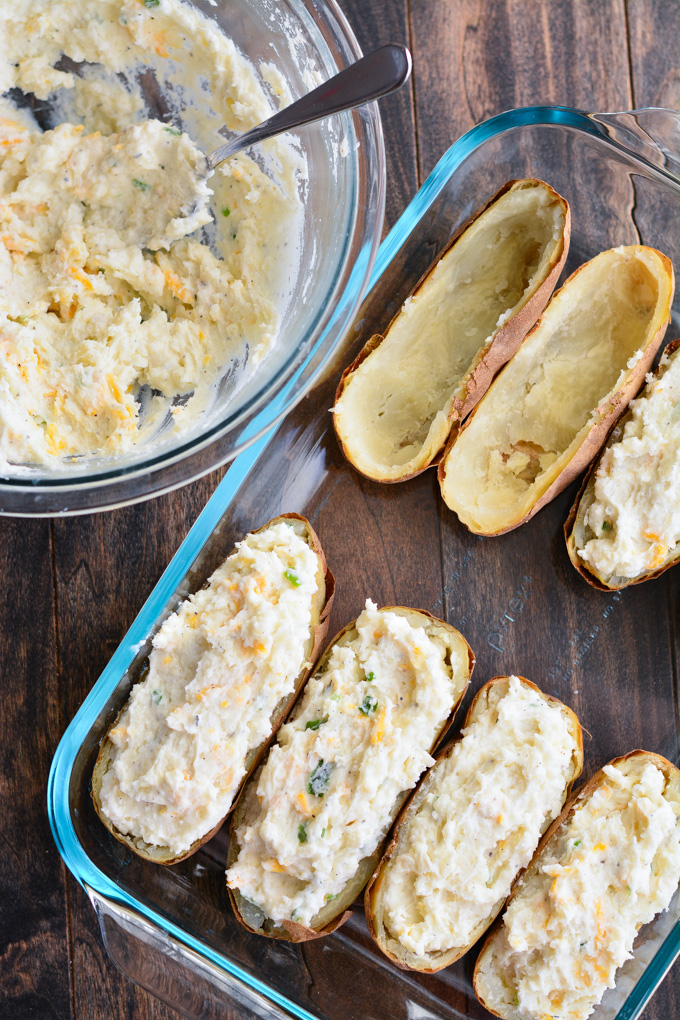 And of course this is another amazing recipe from my mother (as good as her dinner and cinnamon rolls).  Seriously guys, she should really be the one writing this blog.  It’s thanks to her I can cook and have good recipes.

But I should mention that I did a little tweaking to the recipe.  I basically just cut down on the fat (sour cream, butter, cream cheese) by about a fourth (50 calories and 5 grams fat per serving!) so it’s really not that noticeable in taste… just your waste line. Don’t make any more adjustments/substitutions or you won’t get the same creamy delicious results. 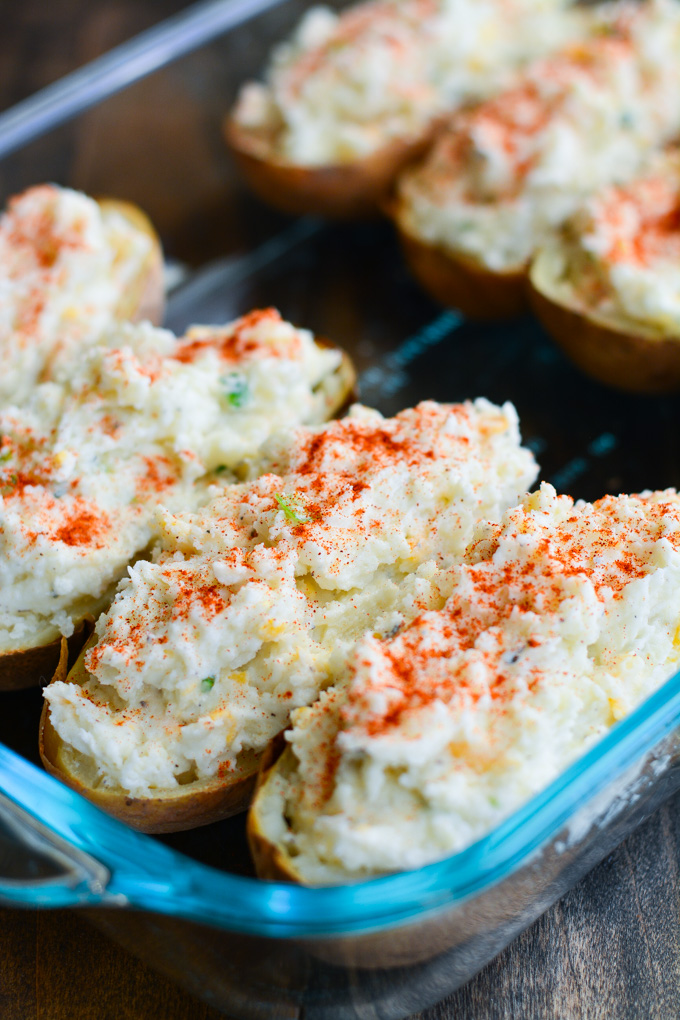 I have always been a big fan of potato skins and these are similar in that they are baked and loaded with cheese and green onions but I like that these are more filling since they are stuffed with mashed potato… and cream cheese, sour cream, and butter. You can eat just the inside but I prefer to also eat the skins after eating most of the inside. 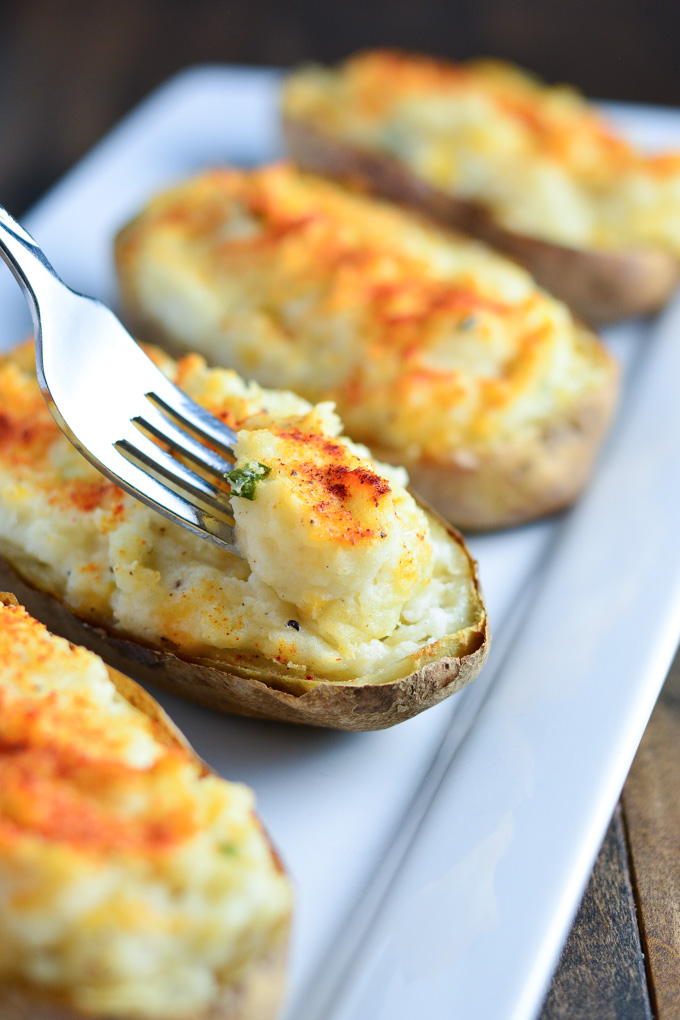 These potatoes are a definite favorite in my family.  When my siblings and I were kids, twice baked potatoes were often requested as part of our birthday dinners along side another favorite– beef brisket. They are also really good along side baby back ribs. 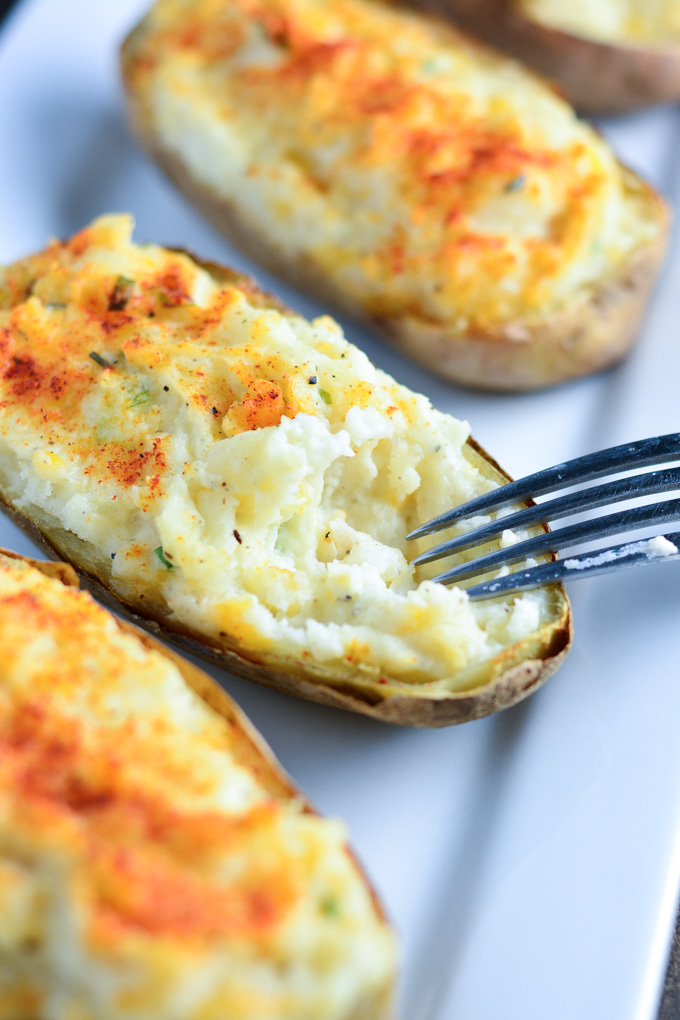 How to Cook Twice Baked Potatoes

First, you’ll wash and then poke the potatoes with a fork. Poking the potatoes allows the steam to escape the potato without it exploding. Believe me, you don’t want to clean that up.

After baking the potatoes and letting them cool enough to handle, you’ll cut the potatoes in half lengthwise and scoop out the flesh and place it in a large mixing bowl.

You can then proceed to add the other ingredients to make the filling- sour cream, butter, cream cheese, seasonings, cheese… there is so much yummy goodness in there!

Once mixed, place the filling back into the shells. Finish it off with a dusting of paprika and at this point you can pop them in the oven and enjoy in 20 minutes or you can place them covered in the fridge for later.

Knife Set– I got this when I got married almost 8 years ago. I use them multiple times a day and they’re still going strong!

Hand Mixer– I love my hand mixer. I use it for everything from frosting, to whipped cream, to mashed potatoes. 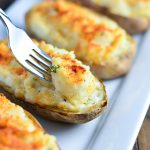