These super tender Slow Cooker Pork Chops and Gravy take just 10 minutes to prep! In four hours you’ll be sitting down to a delicious home cooked meal. This is the perfect dish for Sunday dinner with the family! 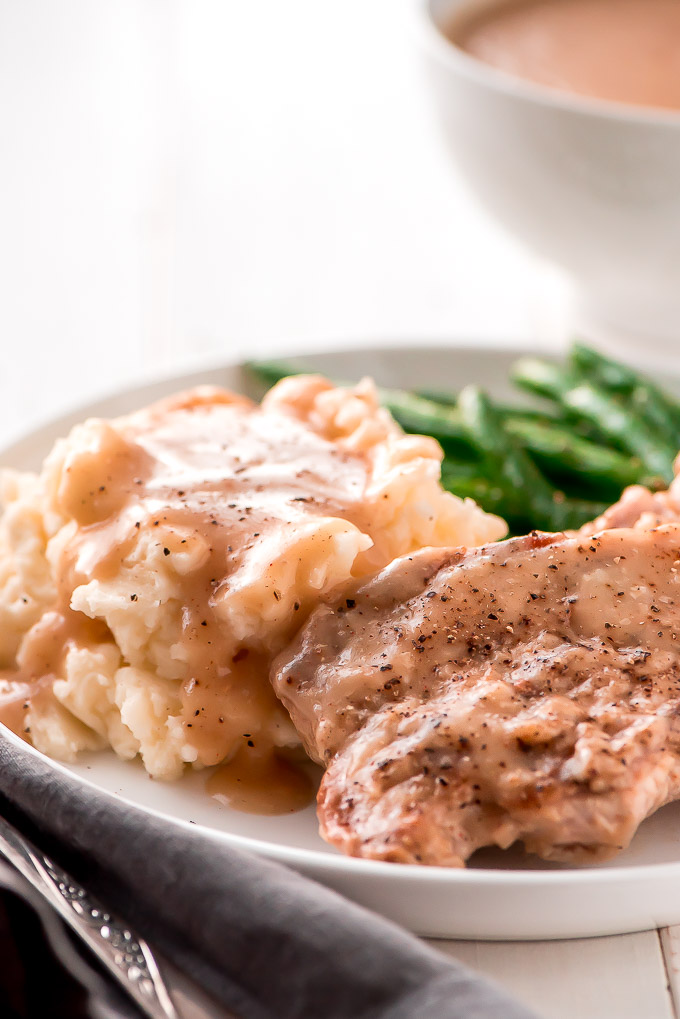 I first discovered this delicious recipe when I was just a new mother. A very exhausted one at that. As a new mom you’re completely obsessed with your baby and want to spend every waking minute gazing at and holding that little bundle of cuteness, and when you’re not doing that you want to sleep. That leaves little time for standing over the stove even if it’s just a 30 minute meal like Apple Spinach Pork Chops or Meatball Veggie Ramen. So that’s why you need easy meals like this Slow Cooker Pork Chops & Gravy. With a meal like this you can actually follow the advice to “sleep when your baby sleeps” and have a delicious meal on the table for the family. 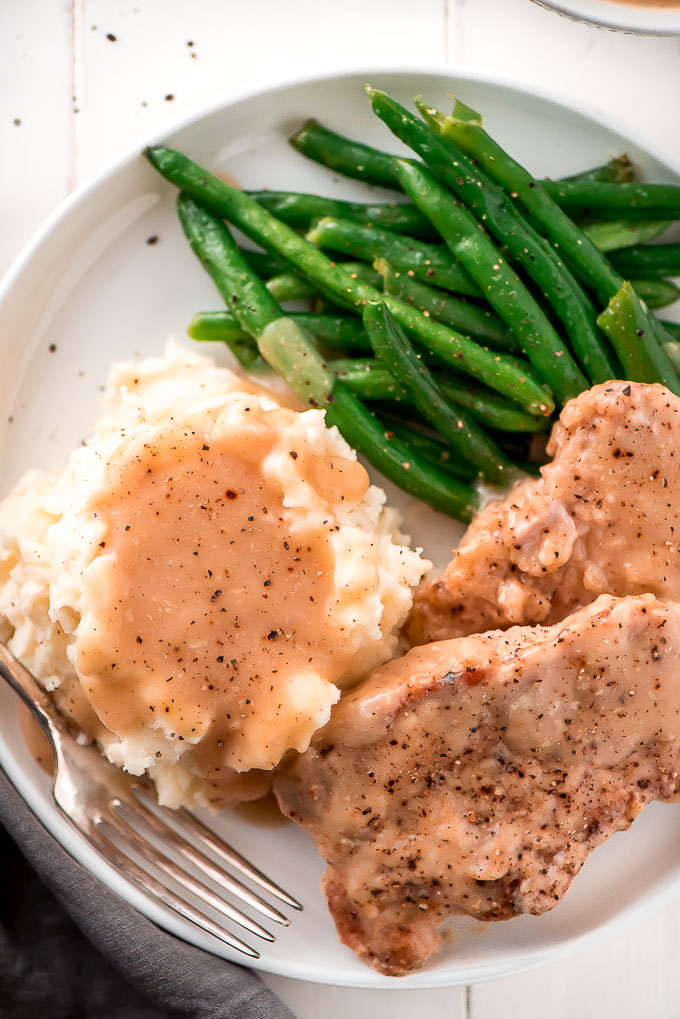 Or maybe you aren’t a new mom but are just a busy person or even lazy when it comes to cooking. This seriously takes just 10 minutes of prep time in the kitchen. You’ll love it! 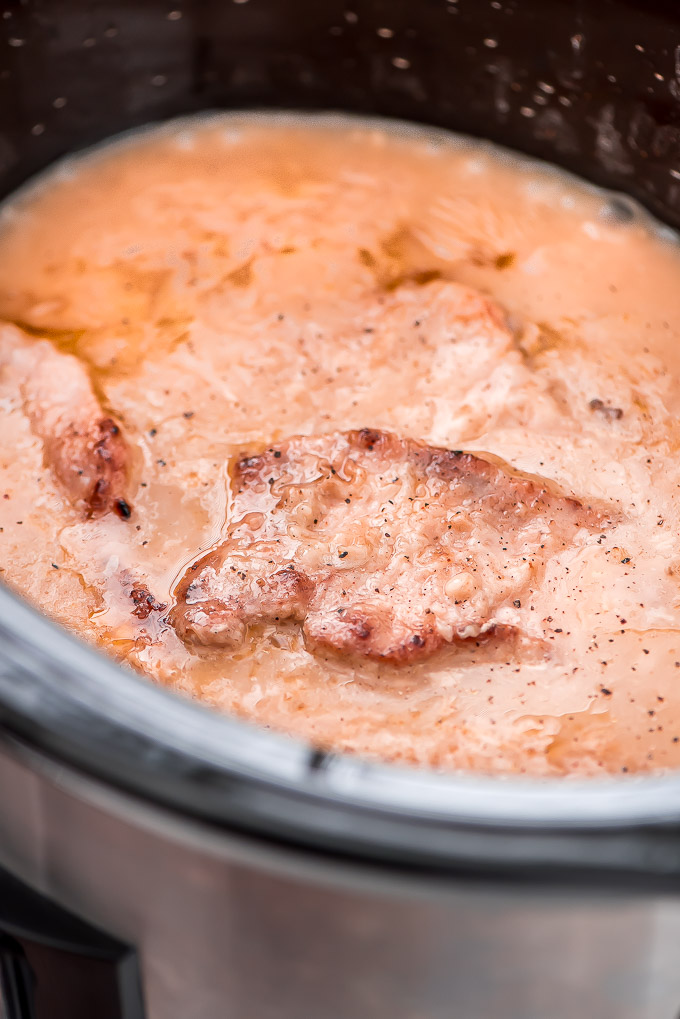 If you don’t care much for pork you can totally just swap it out for chicken but I think you’ll change your mind about pork chops after you try it in this recipe. Never have you had pork chops so tender! Seriously, most tender pork chops ever! Pork chops can often be a bit tougher to chew than chicken but you won’t have that problem in this recipe. Cooking it low and slow always does the trick. 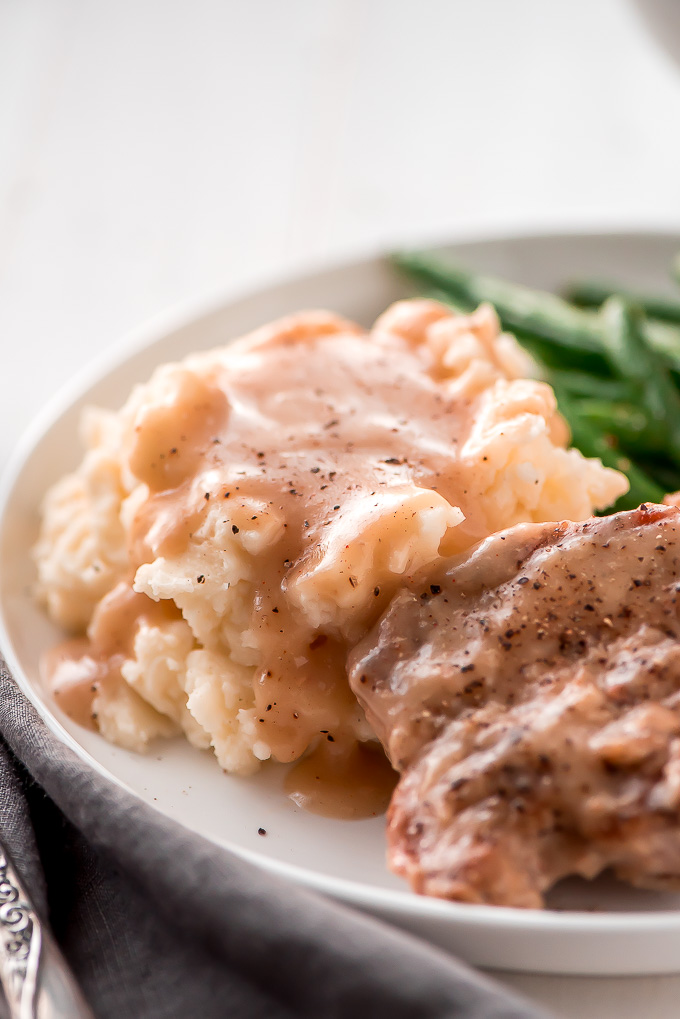 Besides the slow cooker working it’s tenderizing magic in this recipe, you also get instant gravy! So after you dredge the meat in flour, you mix the leftover flour/spices with chicken broth and then pour it over the pork chops. Cook for four hours on low and ta-da! Super tender pork chops AND gravy! Whip up some mashed potatoes and green beans and you’ve got a lovely comforting meal the whole family will enjoy.

And if you are in search of a slow cooker, I recommend this one that has a lockable lid and is programmable. Everything you want and need! The lock feature makes transporting soup stress and mess free! Trust me. Unfortunately I have experience with soup spilling in the car. Not fun. 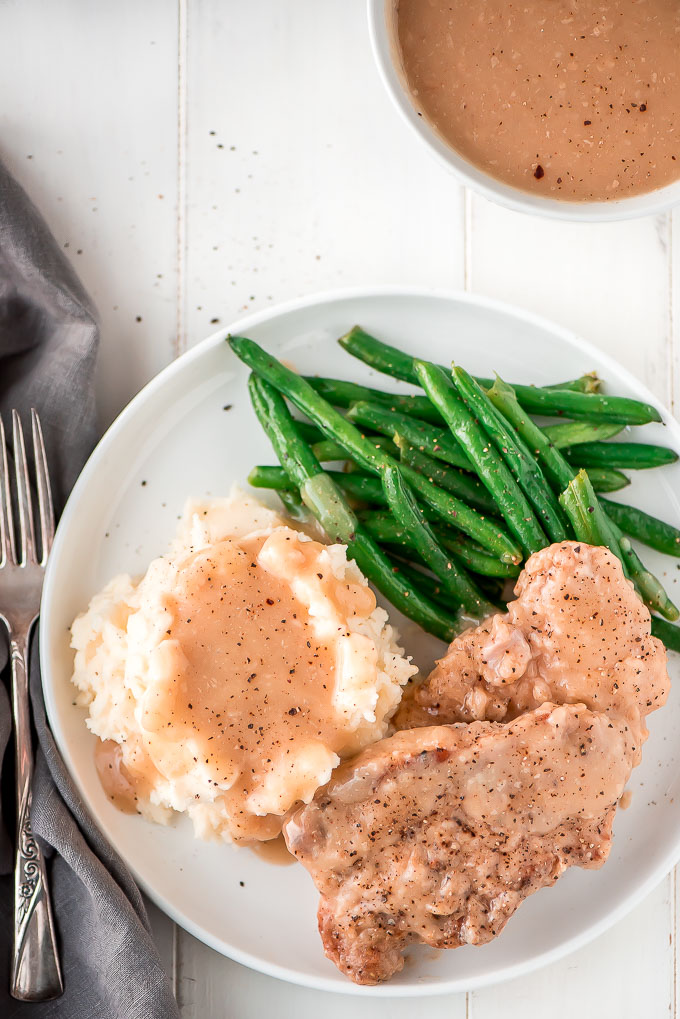 Go pop this in the slow cooker and enjoy your afternoon, followed by a yummy dinner with the fam.

LOOKING FOR MORE COMFORTING DISHES? CHECK OUT THESE:

Slow Cooker– This is very similar to the one I use but it has the addition of a lockable lid which is awesome for when you are transporting food for a party or pot luck, especially soup.

Pie Dish– It’s not just for pies! I love using this to coat/dredge meat. 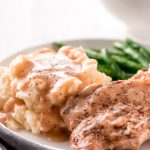 Course: Main Course
Cuisine: American
Did you make this recipe?Tag @GarnishandGlaze on Instagram and use hashtag #GarnishandGlaze