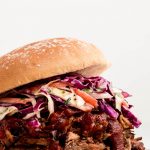 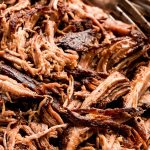 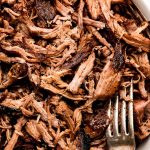 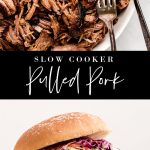 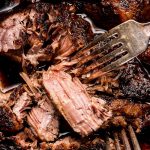 Slow Cooker Pulled Pork is incredibly flavorful, tender, and juicy. This easy to make shredded pork is so versatile and can be used on sandwiches, tacos, salads, burritos, and more.

Warm weather calls for a big ole Slow Cooker Pulled Pork Sandwich! Not only is it so satisfying and delicious, it’s so easy to make and great for feeding a crowd. Looking for sides? Serve it with a side of Lightened Up Grape Salad, Watermelon Feta Salad, Slow Cooker Baked Beans with Bacon and/or Summer Fruit Salad.

The Crock-Pot is a magical appliance. Put any meat in in the morning and at dinner time you have amazing fall-apart tender meat. This Pulled Pork is so juicy and flavorful, you won’t be able to stop picking at it while shredding it up.

What is the best cut of pork for pulled pork?

A marbled pork roast such as shoulder or butt results in the most tender pulled pork. Boneless or bone-in both work well, just remember that if selecting bone-in, part of the weight is just bone so select a roast that is a pound or 2 more than what the recipe calls for.

Is it necessary to sear meat before slow cooking?

No. It isn’t necessary to sear meat before slow cooking but it is recommended. Searing the meat caramelizes the outside of the meat giving it greater depth of flavor. It you’re short on time or just forgot, the roast will still taste great.

LOOKING FOR MORE PORK RECIPES? CHECK OUT THESE: 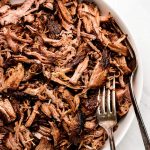 Slow Cooker Pulled Pork is incredibly flavorful, tender, and juicy. This easy to make shredded pork is so versatile and can be used on sandwiches, tacos, salads, burritos, and more.
Servings: 8
Calories: 349kcal
Author: Garnish and Glaze